Here’s a piece that started out being dumped into the Daily Doodles folder on my computer, or at least the parts of it did. A doodle of the words “Take Your Time” done in a flourished style with a slight slant to the composition. After a little while the phrase came back to me and brought a few friends, and together they formed some lyrics from long ago. Twenty-four years ago, in fact. In 1991 Nirvana released the song Come As You Are, containing the lyrics “Take your time / Hurry up / Choice is yours / Don’t be late.”

All four pieces were done on separate pieces of paper, and aren’t inked – they’re just pencil sketches. I took a picture of each one and arranged them digitally. After a little experimentation with some colours, I settled on going for something with a warm feel. There’s definitely a clash between the visual style and the sound of the music that the words come from, but it’s differences like that that are often the most interesting.

Stylistically, the pieces are Copperplate calligraphy with a lot of flourishing. The flourishes help retain consistency through the four sections, but also serve to fill out the spaces that make the lines different. For instance, the first line, “Take Your Time” fills its own space very well, having three four-letter words. The other lines, however, all have one two-letter word, and the second line is only two words long. Though they do make the shapes less inconsistent, I didn’t want the flourishes to force the shape of each section to be identical, as it might look strange, and it would detract from the differences in shape due to the lines. These differences are what make lettering unique and beautiful, and they also add an interesting asymmetrical negative space between the blocks.

This is one of the few forays into coloured work that I’ve done to date, but enjoyed the process and the result, so hopefully there will be a few more splashes of colour coming in the future.

This is a little piece I threw together this week. When I say little, I mean it! It’s pretty small. The x height is about 5mm, which for calligraphy isn’t so tiny, but compared to the lettering pieces I usually do, it’s quite small. 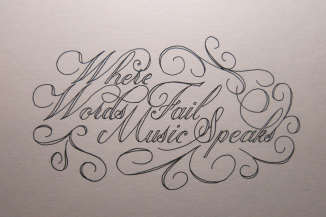 What I was aiming for with this piece was to go for a relatively simple calligraphic style and try to capture the feeling that I’ve seen in lots of progress pictures of lettering pieces that seems to get lost in the final piece. During the design stages the letters are often sketched out, and perhaps filled in lightly with pencil, but usually have darker outlines. Once the piece is inked, the feel of the letters and the overall impression of the piece becomes very different. Having the outline stand out somehow makes the piece feel a lot more spacious and delicate.

This piece is in fact a quote from Hans Christian Andersen. Being a musician and an awkward English person, I often feel that words can fall short whereas music is something that provides a different kind of connection between people. I saw the quote and decided that it would make a nice piece in a calligraphic style. Compositionally it suits a piece that is all in the same style rather than a grand, type-mixing poster. The message itself is about the inadequacy of words, and yet the message is in words itself, so it also suits a relatively understated style.

Recently, I’ve been digitizing more pieces (some to come in a few weeks, too,) so I thought I would quickly throw this piece through the digital assembly line to add a splash of colour. I have a few coloured inks, so I should quite like to add some colour to the physical piece, but the colours didn’t really match up with composition, so I will have to wait until I get some other colours. Here’s the digital version:

This week is another New-Pen-Week! Last time, I got some Rotring Rapidographs, which I use pretty much the same as the old fine liners I started out with. Not much changed in the style of work I produced, but for me, the process was changed a little. This time, however, I got some Pilot Parallels, which are a kind of fountain pen for broad nibbed calligraphy. I’ve been wanting to start practising some broad nibbed calligraphy for a while now, so that I can further my understanding of Gothic/Blackletter styles, and this week allowed me the chance to give it a go!

I found a wonderful image that displays a style of Blackletter that I haven’t seen reproduced quite the same anywhere else. The title of the image is “Williams Style of German Text”, which doesn’t seem to bring up much other than the original image, so I don’t have much more information than what you see there. I’m sure there is much to learn in exploring the style, and I’m going to spend the next few weeks trying to understand the intricacies of what makes the letters function in the way they do, but in the mean time, I took some inspiration from the style, as well as several other styles I’ve seen around the web, and came up with the piece above.

The pens came with two inks, which was unexpected, but it provided me with the opportunity to experiment with a bit of colour, which is something I’ve been purposefully avoiding in other works in an effort to focus on form. After all, restrictions are what give us guidance, and having too many directions to explore often leads to little progress. That being said, it’s sometimes refreshing to allow yourself a little deviation. These inks are black and red, though refills are available for all manner of colours, so I’m interested in getting some more in the future. In the mean time, I found neat feature on my camera that replaces individual colours in a photo for others, no photoshopping required. Here, I’ve replaced the red ink with a green, blue, and brighter red. Look how each colour creates a different feel for each piece. Colour matters! 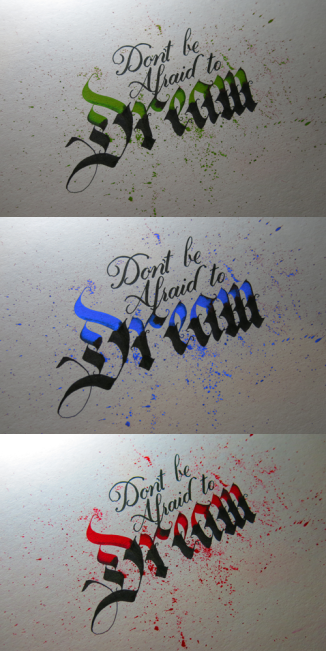 The speckles that surround the letters were made by pulling on the tip of the nib, and letting it go, which flicks the ink on to the paper. Unfortunately, it also flicks it everywhere else, so I ended up with some red fingers, pens and surfaces. Before I did the speckles, I first drew out some guidelines for the word “Dream”, then wrote in the red parts. Once they were dry, I went over in black to complete the bottom part of each letter, then added in the Copperplate above with a brush pen. The speckles came in last because I didn’t want to get my hands so messy if I ended up making a mistake and discarding the paper!