What would the world be like if we stopped keeping time? Probably a lot harder to make appointments, but there is something to be said for not looking at the clock. We’re surrounded by numbers that we get can get too carried away with. Nowadays, it’s like-counts and numbers of follows, but the king of them all is the clock. Sometimes it’s nice to just do something and not worry about how long it’s taking or when you have to finish, put away the screens and stop looking at the clock. 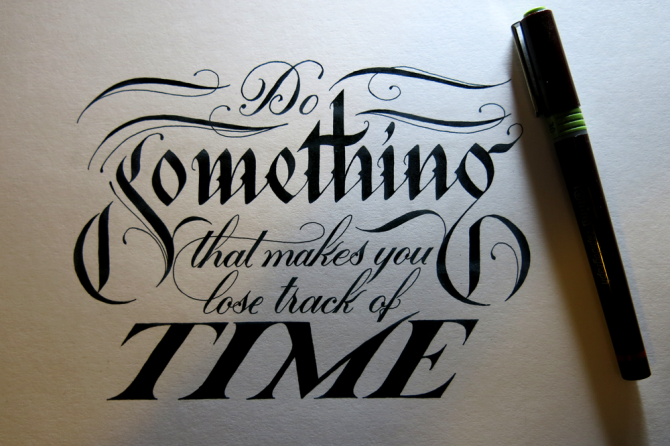 That being said, you may notice that I still put this up in time for Monday’s deadline. Consistency is nice too.

This piece is a bit of a blend between a few styles of calligraphy. The Roman caps you see at the bottom come from a style that was originally a kind of calligraphy done with a wide brush. The Copperplate, (how could I not include it?) is done with a flexible pointed pen, and the Gothic inspired “calligraffiti” is one of the newer styles I’ve been experimenting with using my pilot parallel broad edged fountain pens. All in all, it’s not only a mix of hands, but a mix of instruments. Of course, here, everything was done with the pen in the picture, which is more of a fine liner than any of those other things are.

In learning about calligraphy, and practising the scripts themselves, you can certainly get a better understanding of the letter forms and how they work. It’s an important thing to learn for a letterer, but nothing quite beats meticulously planning out the piece and carefully constructing it. A similar effect could be done through calligraphy, of course, but there are all the little touches that you can add in being free from the restrictions of your tools that make lettering a different art.