This week, I’m a day early. That’s not because I’m some kind of motivation machine, as I’m sure you were all thinking, but because I’m going to be away tomorrow, so I pushed my deadline forward a little. Anyway, to business! I have some new branding that I’m going to be putting up in the coming weeks. First, I have a new logo for myself in the form of a monogram. 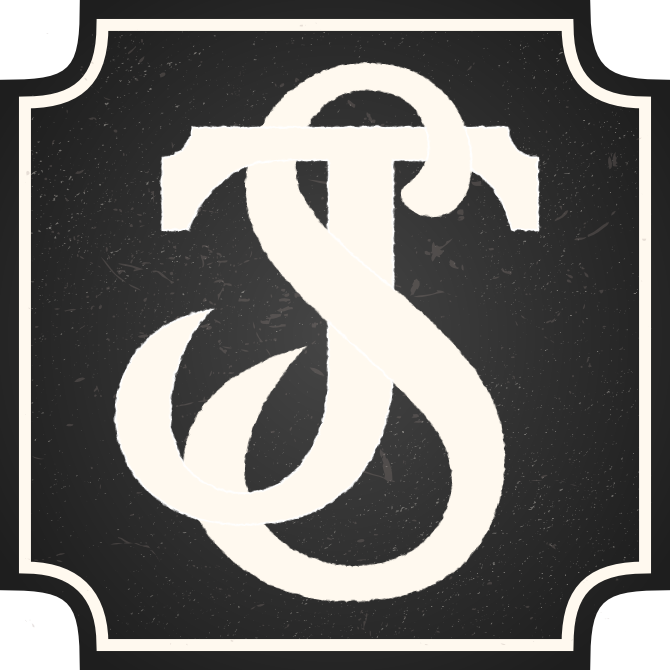 This is part of a lettering piece that’s going to replace the header I currently have for the website, which was an old piece that I did for Thing a Day. Seeing as it was part of Thing a Day, it was a piece that I planned and executed all in one day, so I decided that it was time to think a bit more deeply about my personal branding. I wanted a piece that could be broken down into several parts so that it could fit into different spaces, e.g. business cards, social media, website banners etc. What I came up with is something that you’ll have to stick around to see, as it’s not going up this week. What I am doing, though, is taking the social media element of it, and putting it out there already, seeing as it’s finished. What you see is a vectorised version of part of the lettering piece.

So what’s the deal? Well, it’s a monogram, meaning that it’s my initials combined into an interlinked shape. In the final piece, the letters overlap, and run on top of each other in different places, but I wanted to preserve simplicity for the social media icons. Being shrunk down to a small size hurts! Or at least, it hurts pictures, especially if they’re detailed. With this digital version, I made sure to keep it simple, but added in some details like a smattering of vector textures and a roughened edge atop a gradient background. All that so it looks a bit more interesting when it’s big, as you see it above. However, usually it’s only about this size:

That’s twitter size, which I’m reliably informed is 73×73 pixels. Why that size, I don’t know, however, it’s only big enough for a certain amount, so simplicity (at least compared to what I usually go for) was pretty important.