A commenter in a thread on reddit once posted some advice on how to keep motivated and strive towards your goal. One of the main points in his post (which was full of value) was that if nothing else, every day should be a non-zero day. By that, he meant that even if you only take one step towards your goal on any given day, make sure that you take at least that one step. Even if it’s the smallest thing you can do to get yourself to where you want to be, it means that your day is not a failure. The advice stuck with me, so I made a piece around it. 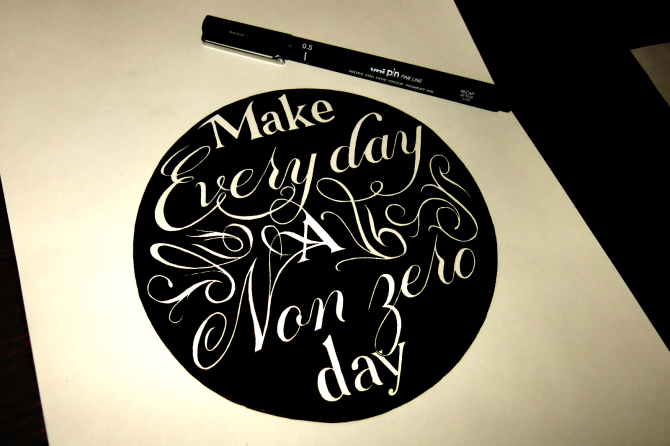 Over the past few weeks, I’ve been focusing on producing pieces with a focus on detail and intricacy, and while that is my style, and not something I want to abandon, I felt like making something a bit bolder. To achieve this, I chose to have the piece contained in a circle, and for the letters to be white on a strong black background. To keep things stylistically simple, I stuck with only two styles: copperplate inspired brush pen script and traditional Roman letters.

With this week’s project, I also wanted to design a piece that I would like to see on some merchandise, such as mugs or posters. It would be exciting to have some things to sell with pieces printed on them, so I thinking of starting to build up some pieces that would work well in that medium. This will be the first of “poster suitable” pieces, which would be something easily printable by a letterpress. As you can imagine, I’m sure, some of my other pieces would be too detailed to be printed easily on a reasonably sized poster, and you would need a very large mug indeed to accommodate them!

In other news, I have a new camera, so all the old photos of my work are likely to be replaced soon enough. I’ll wait until a nice sunny day (which is all the time!) and take some nice photos in the sunlight. That may include this one, as I unfortunately left it a little (very) late to catch the sun for the photo today.