With a similar theme but a different style to a piece I did a while ago (Vertigo) today’s piece is “l’Appel du Vide,” a French phrase that translates as something like “the Call of the Void.” What exactly le vide is, whether it be the void, the abyss, emptiness, is not exactly clear. Nevertheless, it refers to the feeling people sometimes get at great heights or in risky situations where some strange call tempts them to jump. 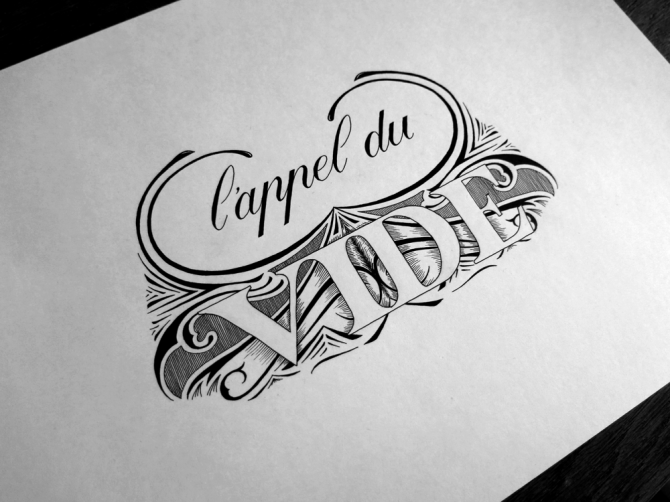 Stylistically, this piece is similar to another piece I created a long time ago (Thursday). I felt that the style fit well with the meaning of the phrase. The negative space of the word Vide indicates whatever it is conjured by its meaning as abyss or void, the busy surrounds emphasising the effect. The flourishes also show a kind of swirling movement pattern, which is in keeping with the idea of dizziness or vertigo.

The first two words are in a Copperplate style, notably with French style P’s. Seeing as the phrase is in French, I felt it was appropriate to use the French variation, even though to an English speaking audience they can often look like N’s with a strange elongated left foot. The word Vide is done with strong Roman caps, meant to make the word more impactful and make it stand out against the fluidity of the flourishes behind it. As such, the word is in contrast with its background in both tone and form in order to preserve legibility, similar to the choice of letter style in the linked Thursday piece.

Here’s a front shot to give an idea of the composition of the piece on the page, too.