Sometimes I have one of those days when I can’t quite get my mind in gear. Wouldn’t it be nice to just have an auto pilot mode? Well when you have a timetable to stick to, sometimes you just have to do it anyway! Searching for inspiration can be tough, so in light of that, I made this piece this week:

I can’t remember when I heard the phrase, but it’s suited the feeling. I decided to make a light hearted, quick piece that wasn’t too complicated. After all, it’s been a pretty hectic week! Last week I did the words of the week challenge on the lettering subreddit. This week, there was a drop cap challenge, so I decided to do a bit of a speed challenge! I tried to focus more on the fluidity of the lines and less on minute, precise details. I often get bogged down in the details of something, so once I zoom in, it’s often hard to zoom out again and look at the piece as a whole. Maybe it’s a trap a lot of perfectionists fall into, or maybe it’s just me, but the solution is to force yourself out of the usual conditions so that you can’t succumb.

Having some lovely Rhodia dot grid notepaper really helped in diving straight in and not over thinking things. More time that I’m willing to admit usually goes into measuring out the space on the page before I even make a pencil mark for most pieces. Sketching out the design took about half an hour, followed by roughly an hour for inking. That’s much faster than the turn over for a typical piece of mine, so I’d say that the challenge was a success. I’m pleased with the piece, too.

Aside from those two pieces, I also wrapped up a little client project for a tattoo design this week. The brief was to have the word “Ruby” in a similar style as Monday. The dimensions to work with turned out to be perfect for the word. As it was just for a basic design, the client opted to have a slightly less detailed piece than Monday, so you’ll notice a few dissimilarities. 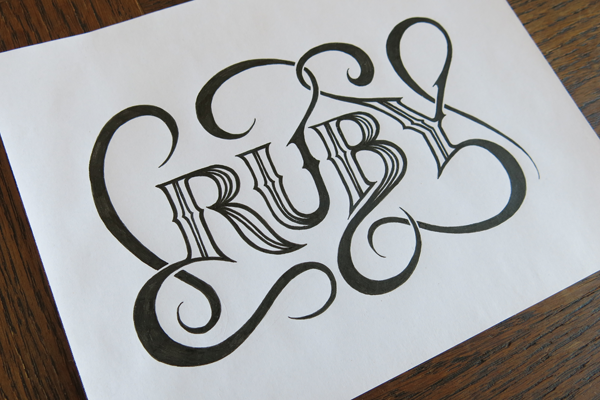 The next lettering challenge isn’t up yet on the lettering subreddit (where are you mods?) so I don’t know if it’s something I’d like to do next week, but I’m thinking that I might make a thing of doing the drop caps, which come up every fortnight. I think it would make a good series!