Since I did the Days of the Week project, I haven’t thought of a new series of pieces to do yet, but I seem have done a few inspirational-ish quotes lately, so I thought I would continue the trend. This one is part of the unofficial motto of the CIA. Doesn’t sound like it would be so inspirational, does it! In fact, the full motto is “And you shall know the truth, and the truth shall make you free” which comes from a bible verse. The official motto is “The Work of a Nation. The Center of Intelligence,” which didn’t seem like it would make a good lettering piece, so I thought I’d go for the unofficial one. 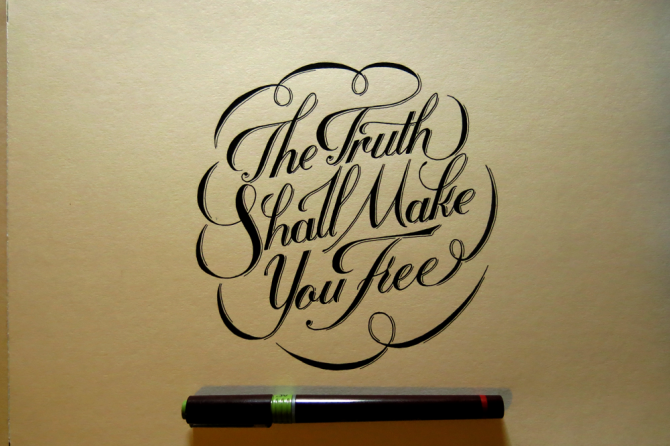 With this piece, I wanted to achieve something similar to what I was going for with Just Some Words. I’ve seen plenty of pieces around that make no attempt at combinations of styles, but rather focus on the form of the piece, and keep the words all in the same style. I feel like I got closer with this piece than I did with the other one; it’s a style I would like to explore further in the future, so there may see what I can do to make a few pieces thematically linked as a nice little series.

Here’s a little look at the pieces of paper that lead up to the final piece:

I recently became a mod over at /r/lettering, and seeing the quite frequent posts asking for advice for how to begin, I was thinking that I might post a blog post soon that is aimed towards providing some insight into the process. I usually make some comments about what happened on the way to each piece, but a more general tutorial might be a good place to direct people who are looking for some window to how to go from a blank piece of paper to a finished piece. Above, you can see a little bit of what went into designing this piece from initial sketches to trying out some ligatures for the word “The” to making a full pencil sketch to see how it would look at the right size.