Happy Monday! Or as I like to call it, Friday! 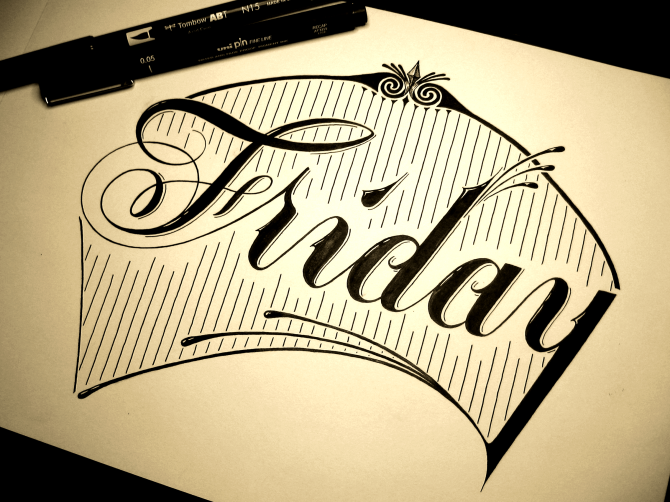 I don’t really call Monday Friday, and I do, in fact, have a solid grasp of what day of the week it is. The thing is, however, that this is the 5th instalment of my Days of the Week project, meaning that today’s piece is Friday! This week I was having an interesting time playing around with a new brush pen of mine, which you can see in the picture. I experimented with a lot of different styles and found that it’s a very versatile thing, but it’s also not as easy as it looks. The brush pen is great for a couple of uses. First, it’s much faster at hashing out an idea than it is with a pencil, meaning you can chase the ever elusive image in your mind that bit quicker, hopefully capturing more of its essence as you go. Second, it can be used to fill in block areas of shading much faster. Both of these uses were a great help to me this week, and the piece draws inspiration from brush lettering styles and makes use of the brush pen’s speed at filling in. Unfortunately, however, it seems to me that the ink has a different quality to it than that of the fine liners I use to outline the piece, resulting in a slight difference between the inside and the outlines of the letters. You can’t really see it here in the picture, and it’s only really noticeable upon close examination of the piece in person, but it’s interesting to note.

Another thing to note about the piece is the decoration around the letters. There are several artists that I admire who do similar things, their lettering pieces adorned with much ornamentation in addition to the letters that make up the piece. I had a great time experimenting with that idea last week, and it’s something that I’m going to keep in mind in the future for all pieces, too. The form of the piece is not necessarily bound by the letters that make it up, and as I’m starting to learn more about it, it will be something that I’m going to start to consider more in the planning of each piece.

I’m afraid I didn’t take any progress pictures this time, because with all time I took experimenting with my brush pen, the execution of this piece was left a little bit to the last minute! As I’m sure you can guess, the piece to follow this one will be Saturday, but, as usual, it will be out on Monday next week.