Hooray, everyone, it’s Saturday! That doesn’t mean it’s the weekend, of course, seeing as it’s Monday today (or at least it was at the time I started writing). What I mean is that this week’s piece is number six in my Days of the Week series, so it’s Saturday. 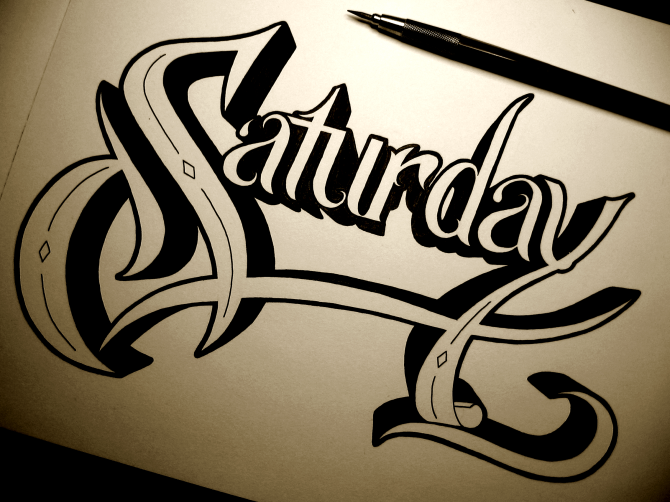 Now, as I’m sure you’re aware, my goal with the Days of the Week series is for each piece to turn out as differently from the previous ones as possible. This, of course, means that each week gets to be more of a challenge as I force myself out of options for styles that I have used in previous weeks. With this piece, I was aiming for something with a graffiti aspect to it, which is a style that I have seen around a lot, but have never experimented with myself. The main elements of what I was aiming for were a slightly organic take on type (rather than script) and the strong outline and background. It took me a long time to find something that satisfied the first element, so I ended up with about half a sketchbook of ideas aiming for something organic seeming that wasn’t based around a script rather than typography. In the end, it all lead here, with curled and disjointed intersections, using vine and drop like shapes to make up some parts of the letters.

Each letter is surrounded with a thick black outline, and behind that is what you could call a drop shadow, and though many would, it’s not quite the right word. Instead, it’s a 3D effect that is used on many pieces by many lettering artists, but filled in a solid black, which gives it a much more graffiti-esque feeling. The piece has a single point perspective, meaning that each letter’s backdrop points towards the centre of the image, somewhere just under the R. It’s for this reason that you can’t really call it a drop shadow, as there is no possible light source that could throw shadows in such a way.