What if you had to make a new thing every day? It might be easy to start with, but after a little while, you would run out of ideas. Maybe you’d struggle to think of new things to make. You’d wish you hadn’t wasted good ideas when your execution wasn’t good enough to do them justice. You’d get burnt out and get fed up with doing it and eventually give up. Now imagine if you had to go running every day. At the start, it would be hard to do, and you would feel like you were no good at it. After a while, you would start to feel some improvement; maybe you would be able to run a little further each day, or a little faster. Eventually, you would be much better at running than you were before.

The thing is that creativity isn’t how I described it in the first paragraph: it’s just the same as how I described running. The more you practice something, the better you get. The more you do something, the more your brain understands how it works and how to do it. When it comes to creative things, there isn’t some magic element, some mysterious gift, some much-coveted spark. It’s all down to practice. Do you want to get better at something? Then do that thing a whole lot, and soon enough, you will find that you are seeing improvement. 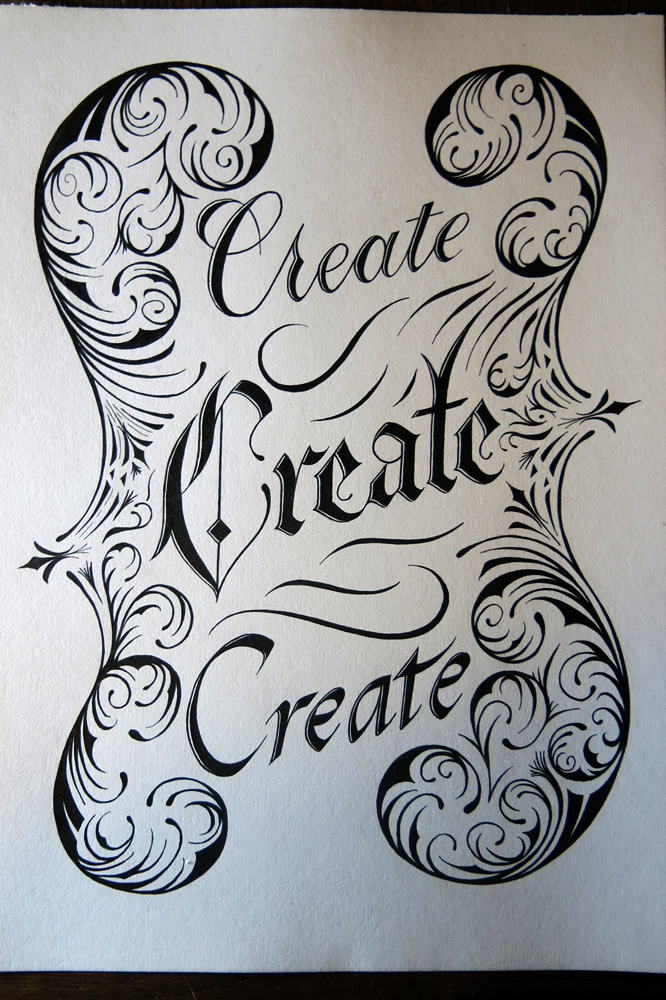 Recently, I’ve been focusing on improving creativity though practice. I don’t wait for an idea to strike, or motivation to come along and help me out. Instead, I look to discipline and structure to guide my way. The nice thing about that is that motivation is fickle, and sitting around waiting for it means that more often than not you don’t get anything done, whereas discipline is something that you can build as a habit over time, and strengthen every time you do exercise it. As part of my learning, I’ve been studying calligraphy in order to better understand the roots of lettering. This piece combines 3 of my favourite styles: Copperplate, Gothic, and Italic.

Having a piece with just 3 words, each in a different style, could lead to an inconsistency in the structure. To counteract this, the piece finds consistency through ornamentation, form, and subject matter. Each word has the same left facing shine to the letters, the ornamentation is self reflective, and the words all say the same thing. The repetitive nature of the words also implies the importance of not just creating one thing and being done with it, but creating as a process that continues independently of the pieces being produced.

Aside from exploring calligraphy, I’ve been dedicating some time every day to making a pencil sketch every day of a few words or phrases. If they turn out well, I may recycle the ideas in inked pieces, and if they don’t turn out well, then I have learnt something valuable in making some mistakes. Here are a few from the last week: 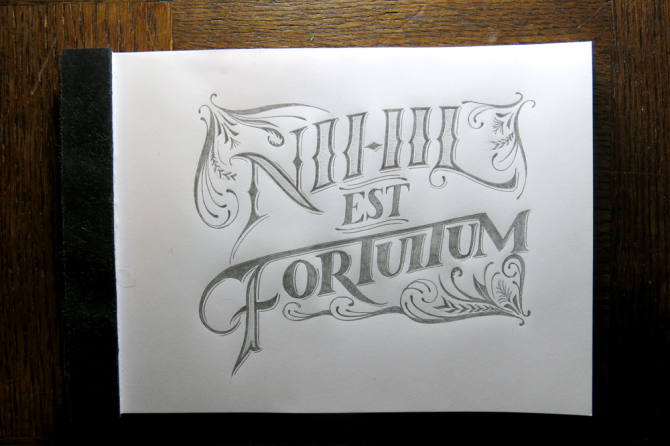 A request someone posted to reddit: Nihil est Fortuitum – Nothing happens by chance. I took the challenge because I liked the phrase; after all, it is true: cause and effect are in everything!

Silence: Using the composition and the negative space to add some expression to the word. 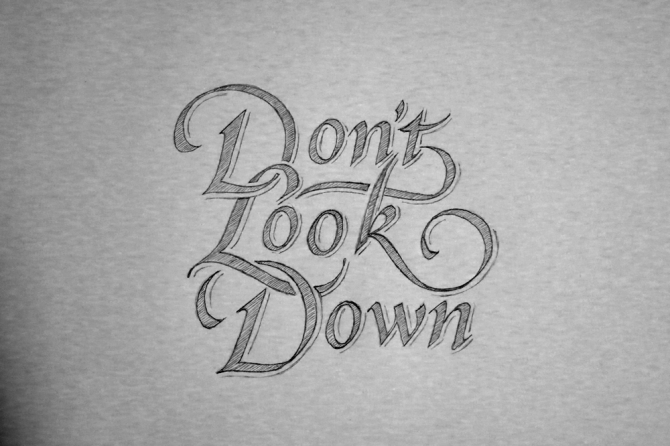 Don’t Look Down: Some simple Italic, and some fun with linking the letters together. Though Italic is quick to perform with a broad nibbed pen, I find it takes a long time to sketch just right with a pencil, unlike Gothic styles and Copperplate, which seem easy to reproduce in graphite.