So it’s a new year, but I decided to wait to do this piece until we were a little bit of the way into it so that it didn’t come of as a New Year’s Resolution. It’s pretty easy to make excuses for why we don’t do things. Sometimes it’s things we might even want to do, but it’s hard to motivate ourselves to do, and instead we end up mindlessly consuming media instead of doing anything productive. It’s what our brains seems to desire, but not what they need. The virtual equivalent of junk food, so to speak. 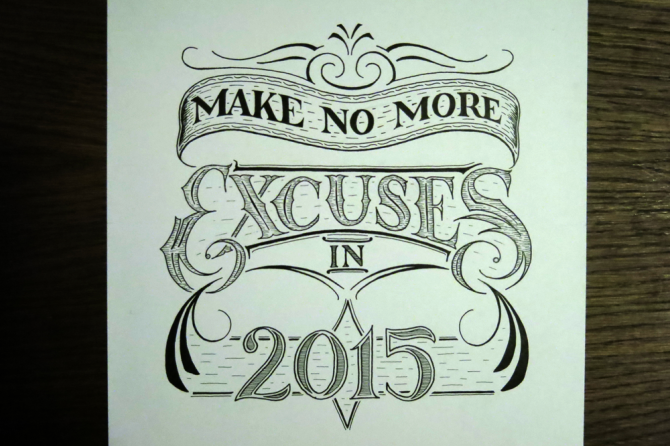 So, this year, I’m only going to make one more excuse, and then after that, no more. So what’s my excuse? “Sorry, I have to stick to my plans.”  My excuse is to keep to my commitments. After all, what’s more fulfilling than achieving things?

Incidentally, this piece was also a little experiment for me to see how I have progressed since I started lettering. When I first gave it a go, I did a piece a day for a week. To measure up to what I came up with in that week, I decided to do this piece in a day, too. Starting from scratch with the phrase “No Excuses” I sketched out several designs before I found that I preferred having something a bit longer, and lengthened the phrase. From then, I moved onto sketching the piece out at full size and inked it all today!