Days! Weeks! Days of the week! I started off idly sketching the word Monday and had the idea for the series. Well, 7 weeks later and it’s finished. Here’s the last one: 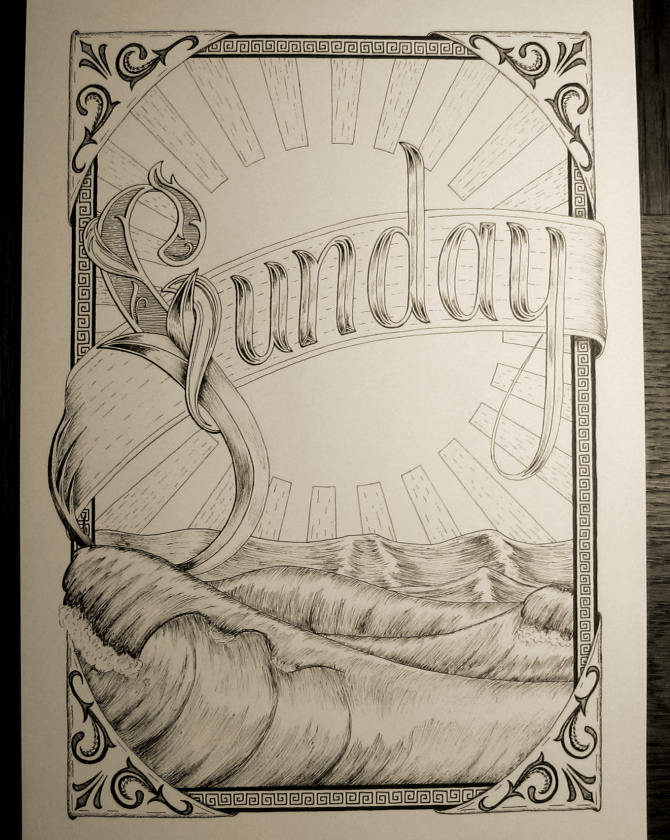 Over the course of the weeks, (or the week,) we’ve had brush style, Gothic, typography, flourishes, graffiti, stippling, even an ambigram. My challenge was to create 7 pieces that were as different from each other as possible. The goal was to expand my horizons, learn how to do new things, and explore styles that weren’t just replicas of what I had done in the past. It was tough finding a style for each piece that set it apart from the others, especially towards the end. With this piece, I had exhausted the styles that I was used to doing, which eventually gave me the idea to make something that looked more like a poster. The main difference is that this piece has a lot more non-lettering elements to it. I could have had it with the word just as it is, but seeing as so many lettering pieces are simply the words sitting stark and bare, I wanted to embrace the challenge of deviation from things that are too familiar.

One of the results of having such a detailed piece is that I under estimated the amount of time it took to complete it, meaning I’m a little late in posting it, as it’s just past midnight. Next week, I have some client projects to get working on, so I will either upload some progress, or finished shots of them, or I will get back to doing some pieces that aren’t just single words, like this series has been. Come back and check it out!

Just in case you missed any of the other Days of the Week, here are the rest: