Lately, I have been working on composing pieces with more ornamentation and flourishes. My goal has been to get a better understanding of how to create lettering pieces that aren’t based solely on the letter forms and the shapes of the words. Doing a daily doodle has given me some nice time to focus on exploring different options, and so for this week’s piece, I’ve used one of my daily designs. “The Future is Soon.” I’m pretty excited about the future, and thankfully, it’s coming pretty soon. At times, the future has been much further away, but at the moment, the future is the closest it has ever been. That is to say that in the past, things didn’t change much for a really long time. Nowadays, however, things are changing much more. Change is, if nothing else, interesting, and though “may you live in interesting times” is often said to be a curse, I can’t help but feel excited.

The phrase “may you live in interesting times” is said to come from Chinese, though no source has been found. The nearest related expression translates to “better to live as a dog in an era of peace than a man in times of war.” And speaking of the future, it’s likely to have the least amount of war since pretty much forever. People often say that the world is going downhill, but in fact, we live in a time of peace and prosperity greater than any other. It seems like the future will be a pretty good time to live; that said, no day is better than today.

Here are some of the daily doodles I’ve done this week: 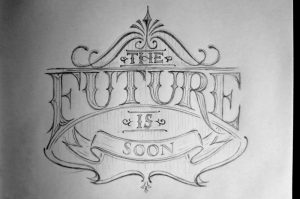 “The Future is Soon.” The sketch I made into an inked piece today. 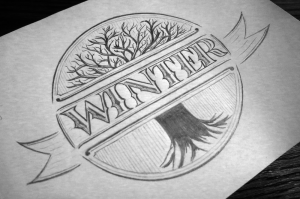 “Winter.” A piece I made yesterday, the last day of November, in an effort to be a little seasonal. 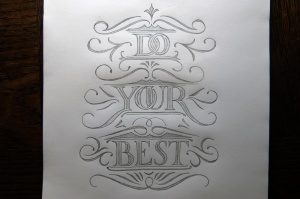 “Do Your Best.” A little piece to motivate myself to do well, but also to know that doing your best is always something you can do if you put in the time. 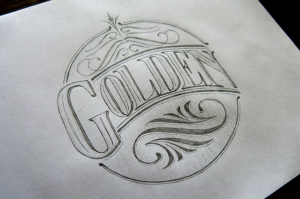 “Golden.” A single word piece to practice some flourishes and some tall letters in a circular design.

In other news, I got through the first of the nice A5 Rhodia pads of paper I bought a while ago. I started on just for daily doodles and the drop caps I did in Inktober. The “Golden” sketch was the last piece in this one, with “Do Your Best” being the first of a new pad. Here’s a picture of all the pieces I made with this pad: 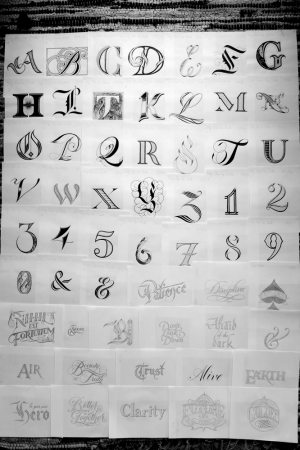 There are 57 designs here, and the pads come with 80 pages, which means I used 23 pages for sketching, tracing, ideas and as guard sheets.